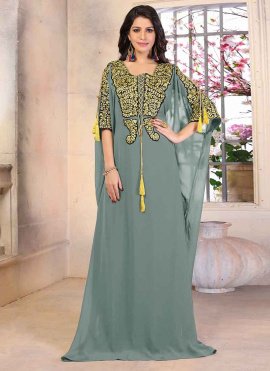 Kaftan is a long-sleeved robe with a deep décolleté that is often covered with embroidery.
“Moroccan Kaftans“, as it is popularly known worldwide, has a Persian origin and existed dated back to 600 BC. A symbol of imperialism in the past, the Ottoman sultans used to wear kaftan very often. Although, the first time that kaftan was mentioned in Morocco was in the 16th century, it arrived as a clothing in Morocco when Muslims and Jews emigrated from Andalusia.
Therefore, one can recognize the influence of different cultures on the clothes. The kaftan, more recently, has also quickly become a must-have for its exotic look and the comfort of the body.

Moroccan Kaftan is adornedby both women and men. It is particularly a characteristic of the warmer regions of Africa, as it allows the ventilation of the body and thus decreases the body temperature. In no circumstances should Kaftan be confused with a traditional Moroccan djellaba. Although both garments look similar, djellaba differs because of its additional characteristic, i.e., hood.

In spite of kaftan becoming popular in several regions of the world, this piece of clothing receives special attention in Morocco, as it is worn in everyday life as well as at official events, depending on its variables – Fabric, Style & Embroidery. Other than serving its purpose in hot climatic regions, Moroccan Kaftans are even worn at special events like weddings. Especially, handmade kaftans are designedto suit the individual body type &style preference of the person.
Today, Kaftan is also often seen on the red carpet, for which the modern designers are to be thanked. Over the years, the garment of Moroccan Kaftan has become economical due to its mass production, so almost anyone canafford one. Kolkozy offers you the premium of all worlds – Comfort, Unique Artistry and Great Prices.

Are Your Ladies Leather Handbags Sustainable? The Importance of Sustainable Fashion

Types Of Skirts That A Stylish Woman Should Stack