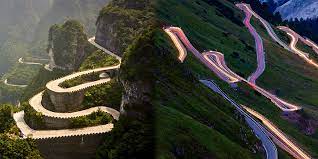 Whether you are cycling, bending in your motorbike, speeding up a four-wheel car, or even driving a brand new sports car, there are numerous roads suitable for your taste of adventure and swing of your mood.

The finest roads are scattered all over the world, but here is a checklist of the 10 Roads to Drive before you die to give you the cream of the crop. Chocobo Names

From Norway to China, to South Africa, to the United Arab Emirates, you will find the most thrilling bends and curves, smoothest tracks, and finest view to complete the package.

From deserts, to mountains, to oceans, and even to the skies, you can have any view you want. So, gas up and take a turn in these best driving roads in the world!

Along the coastline of central California, you can find one of the best views and driving route for you to take.

The long stretch of this smooth ride runs from San Simeon to Carmel, through the Big Sur. For people who want a rush of adrenaline, this road is known for the breathtaking cliffs, while offering a view of the Pacific Ocean’s whitecaps.

A tip during peak hours: detour in the Nacimiento-Fergusson Road, a less-traveled journey as an alternative.

If you are tired of cliffs, rocks, and mountains as your view, and you are looking for a new route to speed up, the Overseas Highway is one of the best choice to pick.

This long stretch of highway has long been in our map (since 1938) but it remains one of the most enjoyed rides you must have. It cuts from island to island across 42 bridges, and goes southwestward to the Florida Keys. The whole ride might take less than four hours, but enjoying the serene waters, you might take longer than that!

Another sweet and fantastic road to go is the Atlantic Road in Norway.

There is no wonder about that as this route boasts an 8.3 kilometer ride going through several small islands and skerries. It cuts between the small towns of Kristiansund and Molde. For drivers, this is like a roller coaster gone real.

Located in the Taihanf Mountains in the Hunan Province of China, the Guolian Tunnel road was a masterpiece of 13 locals for a period of five years.

It stretches for about 1200 meters with a relatively wide comfortable road; nevertheless, it is still considered as one of the most dangerous roads in the world. Yet, thousands of drivers are still mesmerized on the stunning view that it offers. For your start of the trip, most drivers run through Xinxiang, following the Huanyu Avenue.

The Sani Pass in the KwaZulu-Natal province in South Africa is not for the faint-hearted nor the average drivers! Also considered as one of the most notorious roads in the world, you have to have superb skills in driving a four-wheeled car to pass the whole trip.

This long stretch of road runs for about nine kilometers, between Underberg and Mokhotlong. During winter or bad weather conditions, this road is usually closed down.

Going for drier and hotter rides, the White Rim Road in Utah is one of the most outstanding roads to speed up your cars.

It is designed for moderately difficult levels of driving for a four-wheeled vehicle and would take you for about two to three days to complete the trip. Overall, it covers 100 mile of loops and curves, and an expansive view of mountains. It cuts across the Shafer trail, Lathrop Canyon Road, Murphy’s Hogback, Hardscrabble Hill, and Mineral Bottom – an overall difficult but satisfying route!

For a more serene but delightful route, opt for the Deals gap or most known as “Tail of the Dragon” in Tennessee, just outside the Atlantic coast. It stretches for a short course of 11 miles, but is jam packed with about 318 turns and curves.

The trip is boastful of its forest-lined highway and no driveways and intersections will interrupt you in your drive. For tourists, the Tree of Shame adds just the perfect twist in this fun trip. It is best for beginners, but must definitely go to your bucket list!

Resting on the Eastern Alps, the Stelvio Pass is the highest paved mountain pass and the second highest in the Alps.

And if you are not convinced enough, it is also named as one of the greatest driving road in the world by the Top Gear, a British automotive show. It rises for about 9045 feet, with numerous curves in the rocky mountain.

Known as the world’s tallest vehicular bridge, the Millau Viaduct is also one of the best roads to drive through.

It recently opened on December 2004 and overlooking the valley of the River Tarn, just close to the southern part of France. It is a comfortable ride with a slope of 3% descending from south to north, and curves on a 12.4 mile radius for better visibility. It has been said that the Viaduct has one piers summit that is higher than the Eiffel Tower.

Another road offering a desert view id the Jewel Hafeet Mountain Road in United Arab Emirates (UAE). It runs for about 7.3 miles and climbing for about 4,000 feet in its ascent.

It has one of the finest and smoothest track, with about 60 hairpin bends for a right amount of thrill.

If you are coming south east from Dubai, it is just about one and half an hour of ride. This road is a combination of fast straight tracks and sweeping smooth bends!

Get Emergency Services in Just One Day