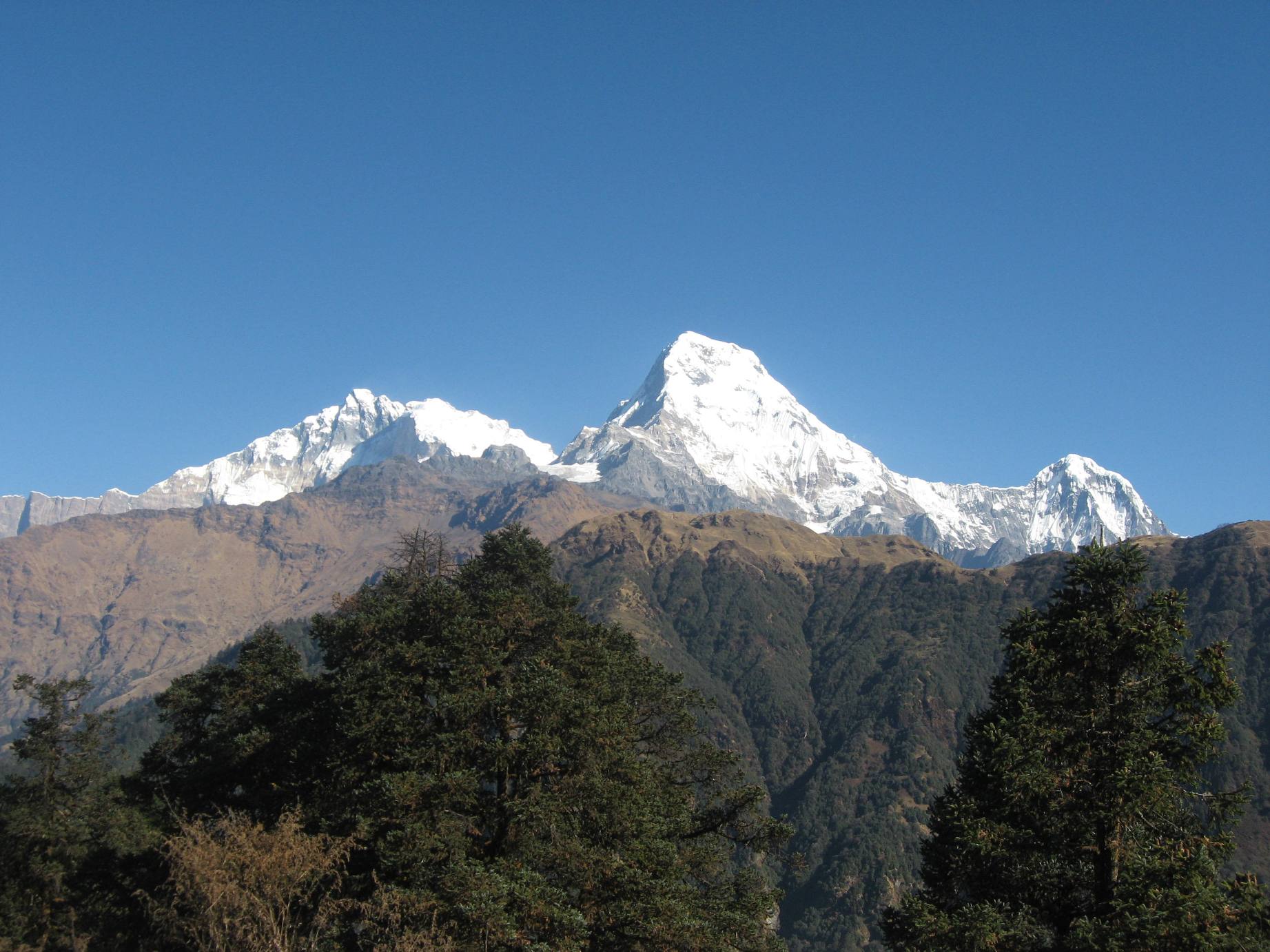 Annapurna Base Camp Trek, one of the most hiked trekking destinations of the Annapurna Conservation Area that leads two Base Camps; Machhapuchre Base Camp and Annapurna Base Camp on the same trip. On the way, trekkers are welcomed by the fabulous mountain sights, enrich cultural diversity, a wide spectrum of lustrous remote farmlands, beautiful rhododendron forests, picturesque villages, hospitable teahouse owners while you trek.

Relatively an easy short and more comfortable trek than any other high elevated journeys of Nepal, Annapurna Base Camp takes you to the maximum elevation of 4130m above sea level. Surrounded by the Annapurna range, Machhapuchhre, Hiunchuli, and Dhaulagiri, trekkers head following a deep gorge that slices between two peaks Mt. Hiunchuli and the eminent sanctified Machhapuchre (fishtail) peak as we head through dense bamboo and rhododendron backwoods by the constricted ModiKhola River valley and the landscapes you witness on the way warm your beating hearts.

An epic journey to ABC kick-start after a short drive from Pokhara to New Bridge [New Bridge], a town that is a short drive away from Pokhara. Pokhara is a tourist paradise that presents a plethora of tourist zones. Seven striking lakes, David’s fall, three most prevalent natural caves (Gupteshower, Mahendra, and Bat’s), various religious shrines add the beauty of this city. It is one most visited tourist destinations in Nepal. Getting Pokhara is conceivable either of ways: from land or air. It takes 6-7 hours through land and takes only 25 minutes via air.

On your first day trek, you enter the beautiful Gurung village of Ghandruk. Along the way, you will pass a couple of other Gurung ethnic communities, beautiful rice fields, and terraces. People seem busy planting/harvesting seasonal crops and vegetables.

Now you have almost a half dozen villages, numerous springs, river gorges, beautiful rhododendron, pine and fir backwoods, striking views of Hiunchuli, Annapurna South to Annapurna I, Dhaulagiri ranges (Mt. Dhaulagiri is the 7th tallest peak of the world), Gangapurna, Khangsar Kang, Annapurna III, Mt Fishtail/Machhapuchhare (It is called the virgin peak of Nepal), to pass before reaching your ultimate destination-Annapurna Base Camp.

On their way back, will the same track mostly. Else, pick any of the side trips making the excursion more scenic and audacious. Poon Hill trek, MohareDanda Trek, Khopra Ridge Trek are the flawless side jaunts for the Annapurna Base Camp journey.

Nepal has four seasons; spring (March to May), summer/monsoon (June to August), autumn (September to November), and winter (December to February). Among them, spring and autumn are considered the paramount seasons for hiking to Annapurna Base Camp. During these periods, you have stable weather and temperatures, clear skies, unobstructed views, and seasonal flowers throughout.

In the spring entire hills around Ghandruk, Dova, and Deurali, the species of rhododendron blossom making the entire hills and villages colorful. The valley in the lower elevations is lush green, the hills are colorful and peaks just above the hills are fully covered by the snow. Gazing at those all sceneries is mesmerizing.

In autumn months the entire nature looks refreshed as monsoon precipitation swishes all the dust particles. The high pinnacles uncover their faces after the long monsoon periods. The birds and animals seem to enjoy the stunning Mother Nature making the entire environs quite photogenic.

The other two seasons are also possible to trek Annapurna with appropriate preparation but are not recommended highly. During winter, the upper parts of the trekking trails might get affected by heavy snowfall and the teahouses around Annapurna Base Camp and Machhapuchhre Base Camp may get closed. Next, the freezing climatic condition and significant decline of the temperature may add hazards to the trek.

IN the summer months, Nepal receives a lot of rainfall, and trekking trails may get slippery and muddy. Landslide, flood, leeches, and misquotes may add a brick in difficulty in this season.

During your Annapurna Base Camp trek, you roughly walk 110m kilometers where you will need to hike for six hours on usual and cover a distance of 10-12 kilometers on average each day. A moderately difficult journey to Annapurna Conservation Area takes you to some of the remote parts in the foothills of Annapurna and Machhapuchhre massifs.

Ethnic Gurung villages, distinct wildlife, and lush vegetation are some of the prime attractions of this trek. Therefore the distance to Annapurna base camp offers you so much to see in about 110km walking. You will not ever regret it as you relish each moment throughout the journeying.

Annapurna Base Camp Trek is a well-known teahouse trek. Sufficient teahouses are available at every stop during this trek. However, due to the heavy flock of tourists in the peak seasons, you never know, you will get the single rooms or not in case you are trekking solo. Most of the rooms are sold on a twin sharing basis and you need to need to share a room with a fellow trekker. It is all because of the conservation area and establishing the hotels/lodges as you like is strictly prohibited.

The provided rooms are facilitated with limited amenities. The rooms contain a couple of beds a pillow, blanket, and a mattress in each. A table, two chairs, and a charging port are kept inside the room. In the lower elevations, the teahouses are facilitated with the attached bathrooms; however, you need to use a shared bathroom and squatty toilets in the uppermost parts of the trail. While in Kathmandu and Pokhara, you have choices of accommodations from five-star hotels to budget inns.

Concerning the food items, will be served as per the menus of respective lodges/teahouses during the trek. Mostly, you will have the multiplicities of local foods, continental and international tastes. Both veg and non-veg food items are available throughout the trip. Generally, you will get three meals a day- Breakfast, Lunch, and Dinner.

Usually, in breakfast, you will have eggs items, toast items, pancakes, oats, porridge, muesli, and tea/coffee. You need to get lunch on the way and normally you will be offered noodle items, dumplings, traditional Nepal meal set, pasta, pizza, sandwich, spaghetti, Thukpa soup, and a couple of other items. Dal Bhat, Chapati, Momo, soup items, vegetable items, salad, and soup are obtainable for dinner mostly.

Day Seven: Trek to Nayapul and Drive back to Pokhara Duration: 6-7 hrs

I am sharing ‘top 7 treks in India’ with you