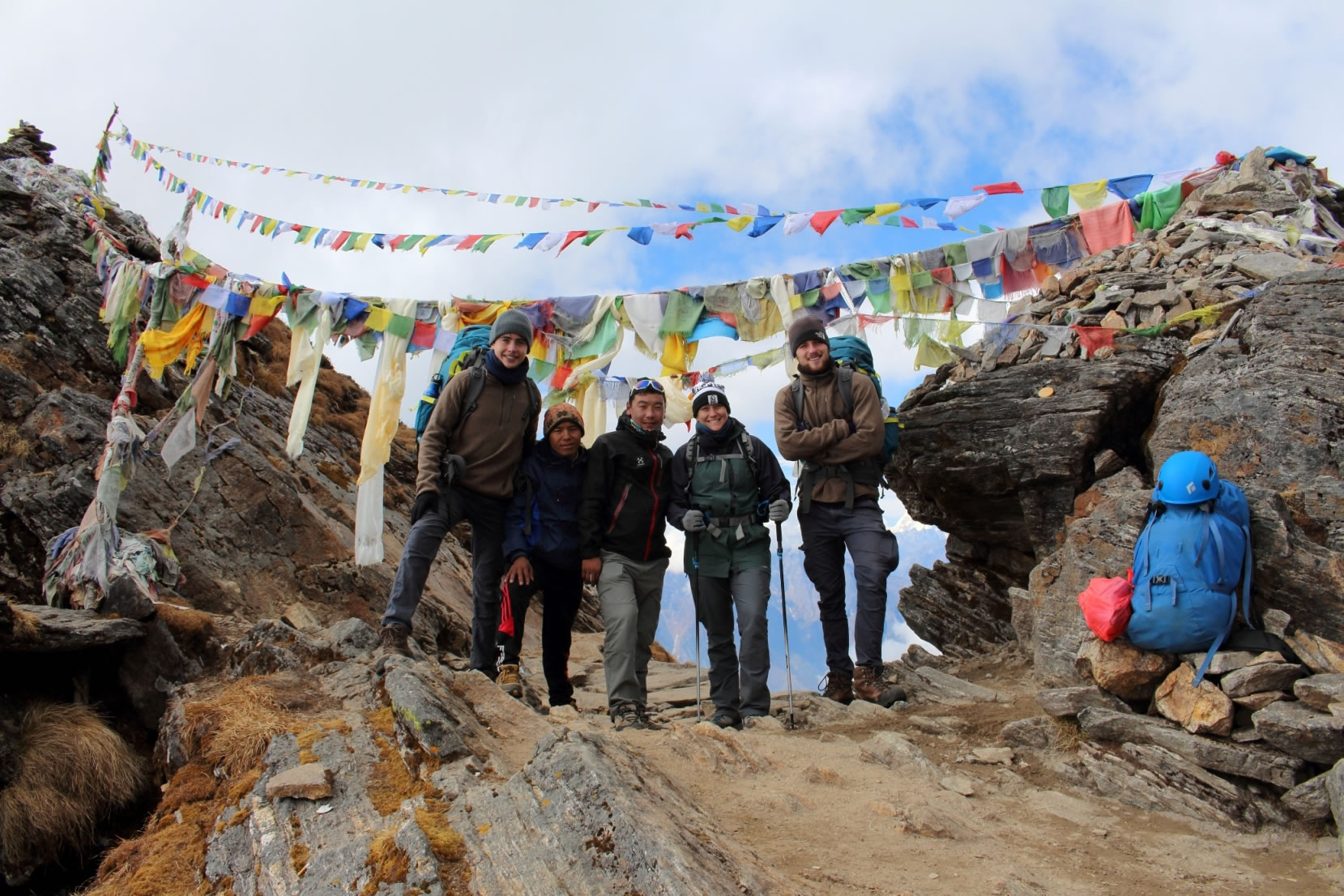 The journey commences after a breathtaking 35 minutes flight from Kathmandu to Lukla (2840m) airport. After gearing up at Lukla, purchasing the necessary permits, walk to Phakding (2610 m) passing the cultural settlements, lush vegetation, well maintained, and marked trekking routes on your first move there.

The next day will head towards the village of Namche Bazaar (3440 m). Namche Bazaar is a major Sherpa town with a lot of facilities including internet cafes, restaurants, choices of accommodation, ATMs, banks, gear shops, etc. Trekkers spend two nights in Namche Bazaar for acclimatization purposes.

Continue hiking the village of Tengboche and spend a night there before ascending to Dingboche Valley. Now, leaving the main trail of Everest Base Camp Trek, you will head towards Kongma La Pass (5535m) and will join the main EBC trail at Lobuche. Kongma La offers the panoramic views of Mt. Ama Dablam, Mt. Thamserku, and Mt. Kangtega.

From Lobuche, follow the rugged tracks to reach Gorekshep (the last settlement before Everest Base Camp-5354m/Kalapatthar-5545m). After check-in the local lodge, and ascend towards Everest Base camp- the foot of the tallest peak of the planet. After observing the mesmerizing sunrise over Mt. Everest and its neighboring peaks, head towards Gokyo valley passing Cho La Pass (5420m). Now, you strain over Renjo La (5,340m/17,520ft) to Thame and Namche Bazaar. The most worthwhile definitive exciting epic journey is for valiant trekkers for a life-changing experience.

The perfect time to trek Everest High Passes or anywhere else in the Nepalese Himalayas for that matter is either spring (March-May) or autumn (September to November) which are considered to be the pre and post-monsoon periods respectively. During these months, the chances of rainfall or snowfall are less, the trails are drier, views are astonishing, valleys are full lush green, weather is moderate and temperatures are adorable.

The rest of the two seasons; winter and summer are possible for trekking but not highly recommended. During winter (December to February, the chances of snowfall are high throughout the trail, and the teahouses in the upper parts might get closed due to the extreme cold and snowfall. In summer, Nepal receives maximum rainfall. The trekking trails might get slippery, rivers may full of floods and trails might get obstructed by landslides. Leeches and mosquitoes might add a step in hazards.

The Everest High Pass Trek is considered a thought-provoking yet rewarding trek. You need to walk 5 to 7 hours a day depending on the destination, taking regular breaks where we admire the mountain views for about 16-18 days. The Trekking trail consists of long climbs, steep descents, and a steep forward trail in the rocky ridges and the deep backwoods as well. To go on such treks, you will get authentic trekking experiences of the Nepalese Himalayas.

If you are eager to have the maximum crystal view of the 4 of the 6 tallest peaks of the planet, eager to touch the highest freshwater lakes, and want to see the first kiss of the sun over giant peaks, this trek is will be an advantage for you. However, this trek is not recommended to those who are suffering from sensitive medical conditions such as heart or lung disease and knee problems.

The Everest High Passes trek has a well-defined trail. To reach the passes, you will pass through different villages mostly via river banks leaving exotic wildlife and vegetation behind. Your actual trek begins and ends at Lukla. The route is presented below.

A Wild Adventure in Ladakh, Trek to Chadar